The Story of the Lyric Theater by Gary Ellsworth

The LYRIC Theater, one of Spearman’s oldest and continually operating businesses has only been owned by two families: the Hales and the Ellsworths.

There have been four movie theaters in Spearman since its beginning.  First was The Arcade, owned by Tom Finley and opened in April 1920.  It showed silent movies.  The Arcade burned down in March of 1922 when a fire destroyed seven businesses on the east side of Main Street.  Mr. Finley lost all his movie equipment and fixtures except the piano.  He hoped to rebuild, but never did.

The second theater, called The Rex, was built on Main next to Hale Drug and opened in June 1927. Around 1932 The Rex sold their building and equipment to S.B. Hale and he renamed it The Lyric Theater.

The Lyric was the third place to see a movie.  The earliest mention of the Lyric in the Spearman Reporter that I can find is January 1923 when a free movie was offered to the residents of Hansford County that lived “out in the country”.  Mr. Hale, one of the early pioneers of Hansford County, first showed movies in the basement of his store, Hale Drug.  After his store was destroyed by a fire in 1924, he built the first brick building on Main.  That building today is The Brickstreet Grill.  The Rex/Lyric, mentioned above, was located where Brickstreet’s patrons now enjoy dining and entertainment in their open-air patio.

Mr. Hale died in 1939 and operation of the theater fell to his wife, Grace, and his son, Wright.  In 1948, Grace and Wright built the theater which is still in use today.  It opened in November 1948, and for a short time, Spearman had two movie theaters on Main until the one beside the drug store was permanently closed.  After Mrs. Hale’s death in 1955, the theater was operated by Wright and he continued with the business until 1976.  In 1963, Wright, along with S.B. Hale, Jr., built the Holiday Drive-In, which was located where IV’s Hungry Cowboy restaurant is located today.

In 1976 my Dad and Mom, Alton and Peggy Ellsworth, bought the Lyric and the Holiday Drive-In.  But wait, there’s a back story here……….

Dad moved to Spearman with his family in 1929 when he was five.  His ‘movie days’ began when he was about 13 years old sweeping and cleaning at the Hale Drug store and The Lyric theater.  In high school, he and his sister, Betty Lou, worked at the Hale Drug soda fountain.  Since there wasn’t a concession stand in the theater, patrons went next door for their popcorn, drinks, and snacks. (Trivia: the door leading to Brickstreet’s patio has always been there and was how patrons entered the drug store from the theater for snacks.)

After high school, Dad entered the U.S. Army Air Corps and served until the end of WWII.  After a short time working in Amarillo, where he met Mom, they moved back to Spearman and Dad partnered with my grandfather, W.A. Ellsworth, in the wholesale/retail oil, gasoline, and diesel businesses.  And, in 1964, he became the sole owner of Ellsworth Oil Co. and Alton’s Gulf service station until 1986 when he sold to a new owner.

It was a little while after Mom and Dad had moved back to Spearman that the Lyric reentered Dad’s life.  Wright Hale asked him to be the bookkeeper for the theater.  And, when Wright built the Holiday Drive-In, our family; Mom, Dad, my sister Gayle, and I, ran the concession stand for several years.  Which brings us forward to 1976 when Wright’s health was beginning to make it impossible for him to operate the theaters.  He told his family he wanted Alton to be first in line for the chance to buy them.  So, that’s when Alton and Peggy became the owners.  In 1986, Dad sold the Holiday’s buildings and land to Jim Ivey.

In 2000, Dad made the decision to close the Lyric at the end of the year.  He offered it to me, and I balked.  Then, one day my daughters, Jana and Jennifer, came to me with my grandsons, Corbin and Slade, in tow.  They asked me if I remembered having fun while growing up around the theater and offered to help me run it if I’d keep it open.  So, Dad and I came to an agreement, and on March 16, 2001, we reopened the theater with “Castaway” and “Save the Last Dance”.  And, at Dad’s suggestion, we changed the name to LYRIC Cinema. Since then we have had a few employees, but mostly the staff has been our family: Jan Ellsworth; Chad, Jana, Slade, and Sloan Knowlton,; Jennifer and her children, Corbin Hughes & wife, Jayli, Lauren, and Rylan Lozano; and the late Ramon Lozano.  This year will mark 90 years with a Lyric Theater/Lyric Cinema on Spearman’s Main Street and 46 years the theater has been owned and operated by the Ellsworth families.

We recognize that without the continued support and patronage of our customers, the Lyric would cease to exist and fade into the past like so many small town theaters have over the years.  For that, we sincerely say THANK YOU. 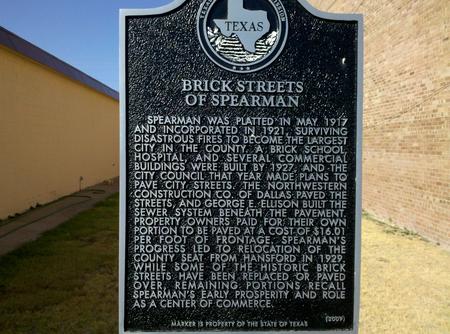